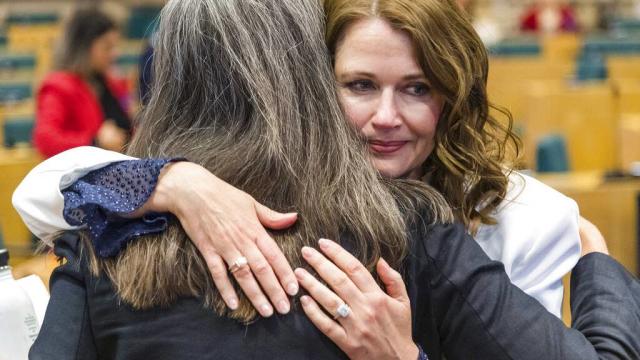 At a conference on violence against women at the European Parliament this week, several former models who were victims of abuse opened up about their experiences.

One in three women have experienced physical or sexual violence in the European Union, according to the bloc’s fundamental rights agency. It says the fashion industry is rife with cases, with many models experiencing some sort of abuse while working in the sector.

Sweden’s Ebba P. Karlsson, a model who has written a book about her ordeal, said that legislation needs to change in order to protect women from abuse.

“When I started sharing my book, I realised I wasn’t alone, there were actually a lot more people and we all came together and realised we need to do something, we have a case here and we need to make a change in the law so people like us can be protected,” she said.

Lisa Brinkworth, a journalist and former model, told Euronews that in some cases the law prevents perpetrators from being caught.

“We are fighting not only sexual abuse by powerful predatory men, some linked to organised crime, but also fighting a legal system that stops us from obtaining justice,” Brinkworth said.

Last March, the European Commission proposed to treat gender-based violence as “a particularly serious crime with a cross-border dimension”.

The new directive is now being considered by MEPs. It should provide clear rules for criminal definitions and sanctions, including a definition of the statute of limitations for such crimes.

For Anne-Claire Le Jeune, a lawyer at the Paris Bar Association, accusations need to be taken seriously and a more rapid response to them is needed.

“It is imperative that procedures and care for victims can intervene quickly, that is, when a victim comes to make a complaint, it must be taken seriously,” Le Jeune told Euronews.

“That the file is immediately passed on to the public prosecutor and that there is a criminal response adapted to the fact that she has reported it. We need harmonisation at a European level, perhaps later at an international level, to give a boost to our legislation.”

It also proposes some maximum prison sentences for violent crimes, including eight years for rape and five years for female genital mutilation.